Jack Connolly’s letter to Minnesota Hockey Posted on May 12, 2012 A month after being named the 2012 Hobey Baker Memorial Award winner as the top player in Division I men’s hockey, Minnesota Duluth senior center Jack Connolly of Duluth sent a letter to Minnesota Hockey (formerly the Minnesota Amateur Hockey Association). The letter, thanking the Minnesota hockey community for his development, was dated May 7 and forwarded to the News Tribune by Minnesota Hockey executive director Mike Snee of St. Paul. An edited version of the letter appears here. Dear Minnesota Hockey: I recently had the honor and privilege of being named the 2012 Hobey Baker Award recipient as the top men’s college hockey player. Just typing that sentence causes all kinds of wonderful emotions and thoughts, but more than anything, it makes me realize how fortunate I am to be from Minnesota, especially Duluth. I put my skates on for the first time in the warming house at the Duluth Heights outdoor rink when I was four. And some of the other four-year-old kids who were putting their skates on for the first time, next to me in the warming house, are still some of my best friends today, 18 years later. We grew up on the outdoor ice rinks and eventually the indoor ice rinks in the Duluth area. My friends and I are extremely lucky to have been coached by so many wonderful people who instilled a passion and respect for the game. I was fortunate enough to play in the state high school tournament and eventually for my hometown Bulldogs, being part of a memorable team that won the school’s first Division I national championship. But it all started with the foundation that was built for me by the community hockey system that Minnesota has. In recent years, I’ve been able to play on teams with players from all over North America. After talking about our childhood hockey experiences, I realized that hockey elsewhere is not quite like hockey in Minnesota. As a mite and squirt playing for Duluth Heights, all I wanted to do was beat the other Duluth neighborhood teams. At the peewee and bantam level, I played for Duluth East, which increased my list of rivals. And in high school, at Duluth Marshall, the only thing better than a game against Hermantown, was a win against Hermantown. All of this was done with my friends. All of this was done while living in the same house where I’d fall asleep as a four year old dreaming about hockey. All of this was done while continuing to play soccer at a high level throughout high school. I didn’t join an all-star team of 10-year-old kids in the winter and go to tournaments in Quebec City or Buffalo. I played with kids from across the alley and down the street, and a big road trip was a tournament in Coleraine. I didn’t move away at age 14 to pursue my hockey dreams. Instead I stayed home to play the game I love with my friends. I did develop. I developed as a hockey player and a person, and for that I want to thank everyone involved in hockey in Minnesota: the coaches at Duluth Heights who picked me up when I fell as a four year old and those connected with Minnesota Hockey who oversee the community associations. I truly appreciate all that you have done for me and other young players in Minnesota. I encourage you to keep doing it because hockey in Minnesota works and is indeed special. From the bottom of my brand new Hobey Baker Award, thank you. Jack Connolly 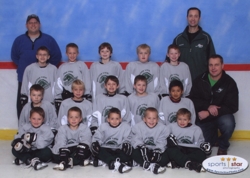 Looking for Moms, Dads, Grandparents, Family or Friends to take Pictures of the Team or Short Video and Email to Coach Rod for Input Here (email: hood@usfamily.net)